Visit the place where Goethe stayed several times.
Who wouldn’t want that?

At Schloss Großkochberg (sometimes also called “Schloss Kochberg”) you have the opportunity to do so. This is a former moated castle in central Thuringia near Rudolstadt. Schloss Großkochberg has an eventful history and is very popular with tourists from near and far. We present the most important facts about this popular excursion destination.

The history of Schloss Großkochberg

The age of the castle can no longer be dated exactly. It is known that the entire complex was built around the central square called “Plattenhof”. The oldest part of the buildings still existing today is the so-called “High House” in the south-east of the complex, which was first mentioned in documents in 1380. At that time, however, this building was part of a moated castle, of which hardly any traces can be found on the site today. The castle itself was first mentioned and described in detail in 1659. This description also contains references to the history of the castle as a moated castle. One example is the spring in the castle park, from which a system of pipes was built to supply the moat with water. As usual in moated castles, the only access to the building complex was via a drawbridge. This was located in the east of the plant and – as its name implies – could be pulled up if there was an imminent danger, so that thanks to the water ditch it was no longer possible to penetrate the plant.

The House to which reference has already been made is still the defining part of the entire complex today. It dates from the 17th century and was built in the style of the Renaissance. In the west and north of the castle, where the moats once extended, an extensive park was built over time, which is connected to the central building complex by a bridge. Later another bridge was added, which creates a connection to the farmyard to the south.

The castle Großkochberg was named after the noble family of the same name from the 13th century. The plant was passed down through generations within the family and later in the family of the Barons of Stein-Kochberg. The wife of one of these barons, Charlotte von Stein, cultivated an intensive friendship with Johann Wolfgang von Goethe. This friendship led Goethe several times to visit Schloss Großkochberg. These visits took place between 1775 and 1788.

Today Schloss Großkochberg belongs to the Klassik Stiftung Weimar. Recently, however, descendants of the Stein family, who now live in Denmark, claimed parts of the castle’s furnishings. Negotiations on this are still underway, with the hope of acquiring individual pieces or agreeing on a permanent loan.

Finally, in 1949, a Goethe memorial was erected in the castle. However, as the castle fell into disrepair in the following decades, extensive restoration work began in the 1960s and 1970s. It was not until 1975 that the castle was finally opened to the public again. In the times of the GDR the castle was used as a recreation home, after the reunification plans for the use as a hotel matured, which were later abandoned.

The current use of Schloss Großkochberg

At the entrance of the castle park there was originally a two-storey, baroque building, which was used as a garden house. Since this building was comparatively well preserved in its substance, it was restored and slightly extended and now serves as a theatre. He was given the name “Das Liebhabertheater”. The building was reopened in 1975 and since then offers an extensive programme of various theatre and concert events, partly with the participation of internationally known and renowned artists. The theatre is comparatively small and offers only 75 seats. However, many visitors rave about it precisely because, in their opinion, the theatre enables a special atmosphere and an intimate proximity between artists and audience.

At that time, the originally large garden of Schloss Großkochberg was expanded into a landscaped park with an area of about six hectares. This park was created in a classical-romantic style, but later almost completely overgrown. It was not until the second half of the 20th century that it was largely reconstructed true to the original. Today, the park includes a tower ruin, the grotto with burial ground, the canvas house, a bathing lake and the flower garden, which is particularly popular with visitors. The whole park is crossed by a sandstone channel in which water flows. This water comes from the well in front of the theatre. The park is maintained and managed by its own nursery. 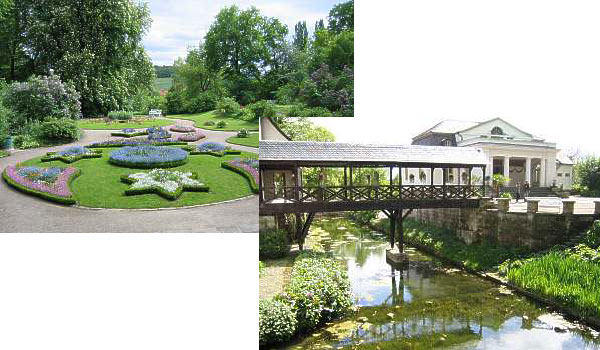 Information for visitors of Schloss Großkochberg

Children and adolescents under 16 years free

Visitors cannot park directly at the castle, they must use the parking lot at the end of the village in the direction of Engerda.